Members of Congress, business leaders, distinguished jurists, and members of the legal aid community convened at Georgetown University Law Center on April 25 for the Forum on Increasing Access to Justice. Remarks were delivered by Rep. Tom Emmer (MN-6), Rep. Joe Kennedy III (MA-4), LSC Board Chair John Levi, Georgetown Law Dean William Treanor, and ABA President Linda Klein. During his remarks, Rep. Emmer stressed that supporting LSC and access to justice is a nonpartisan issue and spoke to the import-ant work undertaken by LSC’s grantees. Rep. Kennedy explained how LSC and our grantees change lives in every corner of the country every day and praised the important message the panelists had shared during the Forum and the inspiration they offered. 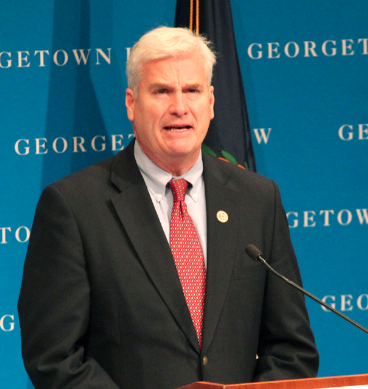 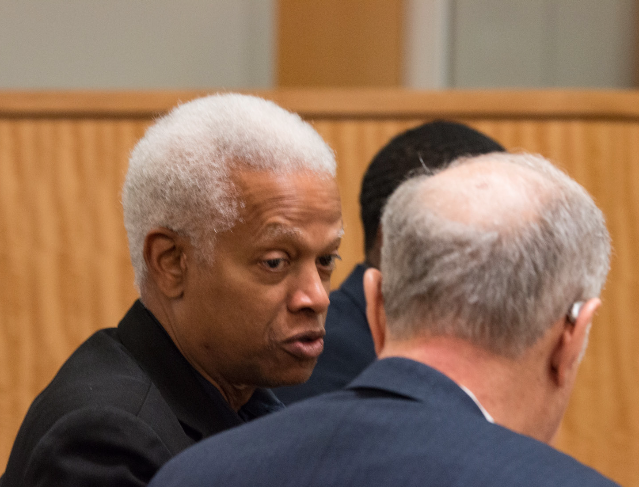 Cleveland, Ohio • July
State supreme court justices, corporate general counsel, and leaders of the legal aid community gathered in Cleveland in July for a forum on ways to expand access to justice for low-income Americans. The forum featured three panels on access to justice issues. 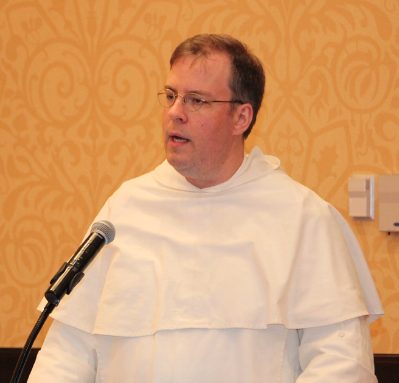 Chief Justice Ralph D. Gants of the Massachusetts Supreme Judicial Court; Shelley Spacek Miller, Senior Court Research Analyst with the National Center for State Courts; and Justice Laurie D. Zelon of the California 2nd District Court of Appeal participated in the second panel, “The Justice for All Project: An Overview.” The panelists discussed how the project supports efforts by states to understand and adopt the resolution of the Conference of Chief Justices and the Conference of State Court Administrators to promote meaningful access to justice for all Americans. LSC President Sandman moderated.

LSC's Privately Funded Initiatives Enhance Work of Grantees
LSC works to raise private funds to complement its congressional appropriation. These targeted, privately funded projects expand access to justice and enhance the work of LSC’s 133 grantees. The initiatives are all projects that would be difficult for a single grantee to undertake alone.   LSC also solicits support from the business and legal communities. In 2017, LSC Leaders Council member and Viacom Vice Chair Shari Redstone donated $100,000 and CBS another $7,500 for a new campaign to increase awareness of access to justice issues in the business community. 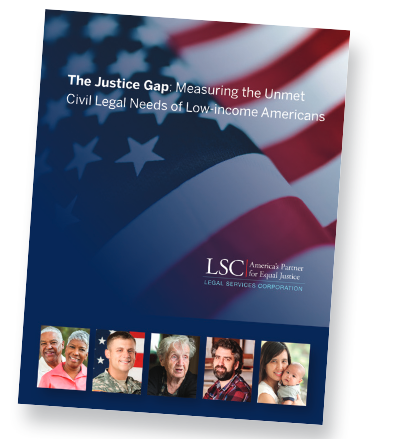 With support from the William and Flora Hewlett Foundation and the Kresge Foundation, LSC produced an updated national report documenting the “justice gap”—the difference between the need for civil legal services and the resources available to meet them. LSC contracted with NORC at the University of Chicago to help prepare this report, which updates LSC’s 2009 Justice Gap Report with new data to compare states, urban versus rural needs, and areas of the law that impact underserved communities and populations. For more on the Justice Gap report, see page 23.

Statewide Legal Aid Website Evaluation
A two-year Ford Foundation grant allowed LSC to assess the accessibility and usability of the statewide legal aid websites in every state and territory. LSC worked to identify best practices and offer recommendations for replicating the content and features of the websites deemed most effective.

Key takeaways from the project include the need to adopt a “mobile-first approach” in redesign—website managers should consider how the site will work on mobile devices before focusing on desktop web design, because users increasingly access these sites through mobile devices. Another important finding was that many legal aid sites were too information-dense and need to streamline content to ensure users can more readily find high-quality resources.

The project report and toolkit was published and offer a practical guide to improving users’ online experience. These resources will serve as a roadmap for states as they implement the next generation of legal information website.

For the second year in a row, the Rural Summer Legal Corps partnered with Equal Justice Works to connect law students and LSC’s grantees with the goal of providing critical legal services to rural clients while engaging a new group of future lawyers with civil legal aid. Thirty fellows worked on projects to improve access to justice for rural residents, including providing direct legal services, engaging in community outreach and education, researching, and helping build the capacity of LSC grantees.

The program was made possible by the generous contributions of law firms, private foundations, and individual donors.

Midwest Legal Disaster Coordination Project
LSC’s Midwest Disaster Legal Coordination Project addresses challenges in providing legal services to low-income disaster survivors. Disasters have a far-reaching impact, but low-income families and individuals are the most vulnerable when disaster strikes. These individuals require preparedness planning support, and in the event of a disaster, they need experts who under-stand the legal issues involved.

The first phase ended in 2016, but LSC expanded the project, partnering with its sub-grantees from the first phase, Iowa Legal Aid and Legal Aid of Nebraska, and working to ensure that at-risk communities throughout the Midwest are better prepared when a disaster occurs and have access to relief programs. Solutions include engaging faith-based communities as key partners in connecting survivors to legal aid providers and creating an online interactive tool to explain significant changes in the National Flood Insurance Program. LSC and Legal Aid of Nebraska will also develop targeted materials to support disaster preparedness with four Native American tribes. The project is scheduled to be completed in December 2018 and is made possible thanks to the contributions of an anonymous funder in the Midwest.

Planning Grant to Partner with Public Libraries
Funded by the Andrew W. Mellon Foundation, this project plans for a curriculum to train public librarians to assist people with civil legal needs. Libraries are frequently the first stop for low-in-come people when researching their legal problems. This project’s goal was to lay the necessary groundwork to transform public libraries into hubs for accessible and useful information about civil legal matters for people who cannot afford a lawyer. The report was completed in December.\

Press reports in January that the President’s FY2018 budget proposal would call for defunding LSC kicked off an unprecedented show of support for LSC from the legal aid community and beyond. More than 160 law school deans sent a letter to Congressional leaders in March urging continued support for LSC. The signatories represented a diverse array of law schools, including private and public institutions of all sizes. Their letter to the chairs of the U.S. House and Senate Committees on Appropriations and the Subcommittees on Commerce, Justice, Science, & Related Agencies followed an earlier letter sent by 25 Catholic law school deans to Mick Mulvaney, Director of the Office of Management and Budget (OMB), opposing the elimination of LSC.

• Consortium for Citizens with Disabilities

LSC’s Leaders Council also worked tirelessly in 2017 to raise support for LSC and its important mission. Members of the Leaders Council—made up of high-profile and influential leaders from industries including business, law, and sports—were among the signatories to the letters of support and took part in Congressional briefings to promote LSC’s importance. Throughout the year, Council members penned op-eds, took to social media, and spoke at public events on the need to sup-port LSC. For more on the Leaders Council’s work on behalf of LSC, click here.  The media also focused on the issue, with many news outlets reporting on the impact defunding LSC would have on local communities. More than 200 articles were published in 47 states in 2017 following the defunding threat. LSC’s leadership also publicly addressed the vital work of LSC and the importance of continued funding. LSC Board Chair John Levi and Board members Victor Maddox, Father Pius Pietrzyk, O.P., and Julie Reiskin penned op-eds highlighting the threat to low-income families and to the rule of law posed by LSC’s elimination.

The Leaders Council played an important role in promoting LSC in 2017 and in meeting challenges that arose during the year.

Following the White House’s proposal to defund LSC early in the year, the Leaders Council joined the Board and staff in rallying bipartisan support in Congress for LSC funding in the FY 2018 budget. More than 160 law school deans sent a letter to Congressional leaders urging them to support LSC, including several members of the Leaders Council: David Levi, Dean at Duke University School of Law; Matthew Diller, Dean at Fordham University School of Law; M. Elizabeth Magill, Dean at Stanford Law School; Tom Miles, Dean at the University of Chicago Law School; Robert Post, Dean at Yale Law School; Margaret Raymond, Dean at the University of Wisconsin Law School; William Treanor, Dean at Georgetown University Law Center; and Robert Vischer, Dean at University of the St. Thomas School of Law. Dean Vischer organized an additional letter sent by Deans of 25 Catholic law schools to the Office of Management and Budget Director op-posing LSC’s elimination. He also penned an op-ed highlighting the importance of LSC’s mission and the need for continued funding that was published in the Minnesota Star Tribune.

LSC Leaders Council member and Viacom Vice Chair Shari Redstone was honored in April at Variety’s Power of Women event. Each year, Variety highlights five prominent women who are using their influence to bring attention to worthy causes. Redstone was an honoree this year for her work on behalf of LSC and spoke compellingly about the importance of LSC’s mission.

“The entire legal system was built upon the assumption that people would have adequate representation,” said Redstone in an interview in Variety. “When they don’t, the system fails and the laws don’t matter. That’s where Legal Services Corp. comes in.

”In June, LSC released its groundbreaking Justice Gap Report, which studied the difference between the civil legal needs of low-income Americans and the resources available to meet them. The report found that 86% of the civil legal problems reported by low-income Americans last year received inadequate or no legal help at all. The Leaders Council co-chairs, Ken Frazier, Chairman and CEO of Merck, and Harriet Miers, former White House Counsel and Locke Lord partner, as well as Leaders Council member Jim Harbaugh, University of Michigan Head Football Coach, helped present the Justice Gap report in a congressional briefing.

Frazier and Miers appeared at numerous events to bolster LSC’s message, including another Justice Gap event in New York. Miers also spoke at an LSC luncheon in Boston about the importance of civil legal aid.

Jim Harbaugh’s public opposition to LSC defunding resonated far and wide with articles in Politico, The Washington Post, ESPN, and more. He also invited LSC Board Chair John Levi and President Jim Sandman to serve as honorary captains of the University of Michigan football team for Legal Services Day on November 4. The event was held in conjunction with LSC’s access to justice panel the previous day.

“All Americans should care about equal access to justice and, as representatives of LSC, John Levi and Jim Sandman represent some of our country’s most important leaders in achieving this goal,” said Harbaugh. “In hosting them as honorary captains, Michigan Football proudly welcomes two of America’s best ambassadors for the ideal of access to justice for all.”