Many organizations today have experience with business process analysis (BPA), a method to analyze a company’s processes and improve the efficiency and effectiveness of its operations.

In fact, there are multiple methodologies used to accomplish the goals of BPA. A notable one is the Toyota Production System (TPS).

TPS was established based on several principles and concepts, including a customer-first culture, an acknowledgment that team members are the most important resource, continuous improvement, a go-and-see approach, jidoka, and just-in-time. Jidoka—loosely translated as “automation with a human touch”—means that when a problem occurs, the machine stops immediately, preventing defective products from being produced. Just-in-time means making only what is needed, when it’s needed. Under this method, Toyota produces vehicles on an as-needed basis, based on the orders received through its dealers. By doing this, it’s able to keep its inventory low while not spending excess labor and time on production.

Implementing TPS has enabled Toyota to quickly and efficiently make vehicles for consumers, save time, and eliminate waste. It’s no wonder, then, that this method has been replicated elsewhere.

For 25 years, Toyota North America’s nonprofit affiliate, the Toyota Production System Support Center, has shared the manufacturer’s philosophy with organizations that have nothing to do with making cars. None of those had been legal aid organizations—until recently, when Toyota partnered with Florida Rural Legal Services.

In April 2016, Toyota came to Florida Rural Legal Services (FRLS). One of its advisors sat by the reception desk in FRLS’s Fort Myers office and took notes about the organization’s workflow. He observed the amount of time spent on actual value-added activity by visualizing and then mapping out the processes. To do this, every action was tracked, from noting walk-in visits and hotline calls, to counting the receptionist’s steps from the desk to the door, to watching case transfers. This would be part of Toyota’s trademark business improvement method.

It’s important to note that prior to FRLS’s experience with Toyota and TPS, the program recognized the need to improve their intake system and applied for and received a Technology Initiative Grant (TIG) from the Legal Services Corporation in 2015. Through the grant, FRLS upgraded the software for its telephone system, added a hotline, and centralized its intake system.

But that upgrade wasn’t enough. After making first contact with FRLS, there were times when clients had to wait for up to a week to be screened for services, and then even longer on occasion to be assigned to a legal advocate. This made the managers think about whether they could shorten the lag time, and whether the different intake being done in each of the program’s four main offices could be made uniform.

Also, as FRLS would later learn through TPS, its intake process had several pitfalls:

These pitfalls made improving the program’s intake take longer. It was also harder to explain the benefits of an improved system after the processes had been normalized.

Just by coincidence, around the same time that FRLS was rethinking its intake, Melissa Moss, deputy director for strategic initiatives at the Florida Bar Foundation, was looking for somewhere to pilot Toyota’s business improvement strategies. She picked FRLS “because of the important safety-net role it plays in 13 South Central Florida counties.” The final step was an in-person meeting between some representatives from Toyota and FRLS. Then the partnership was on.

FRLS started with the first step—clarifying the problem—by mapping its current processes. (Note: The following images are taken from FRLS’s presentation at LSC’s 2018 Innovations in Technology Conference.) 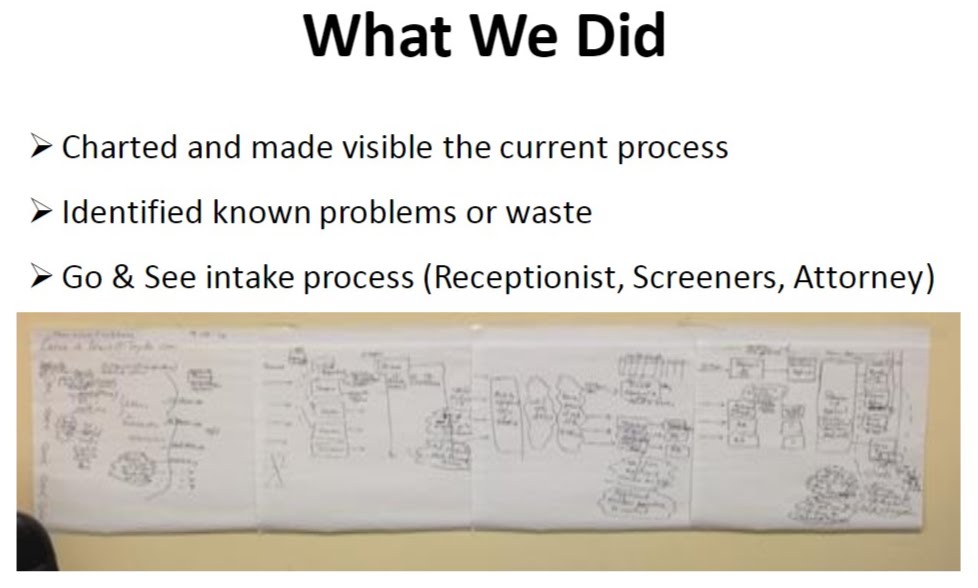 This step involved comparing the current condition of their processes with the ideal condition. The gap between the two conditions is the opportunity for improvement. Added up, small improvements over time result in large improvements. 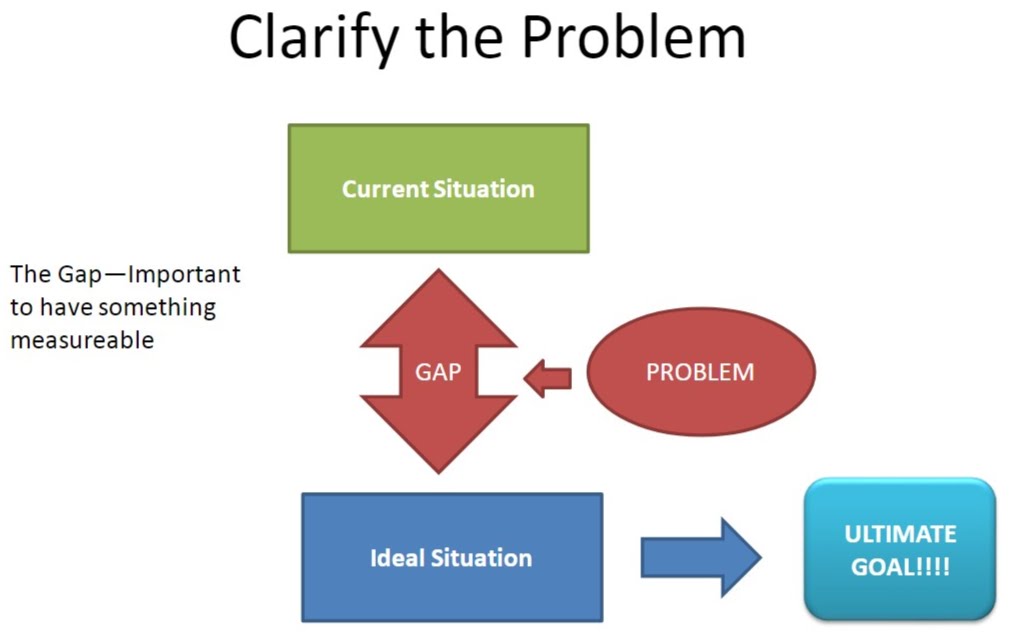 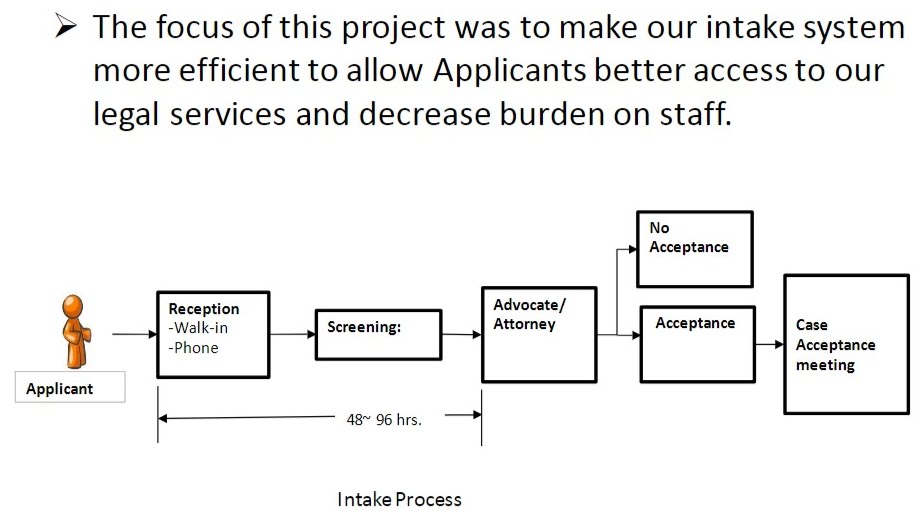 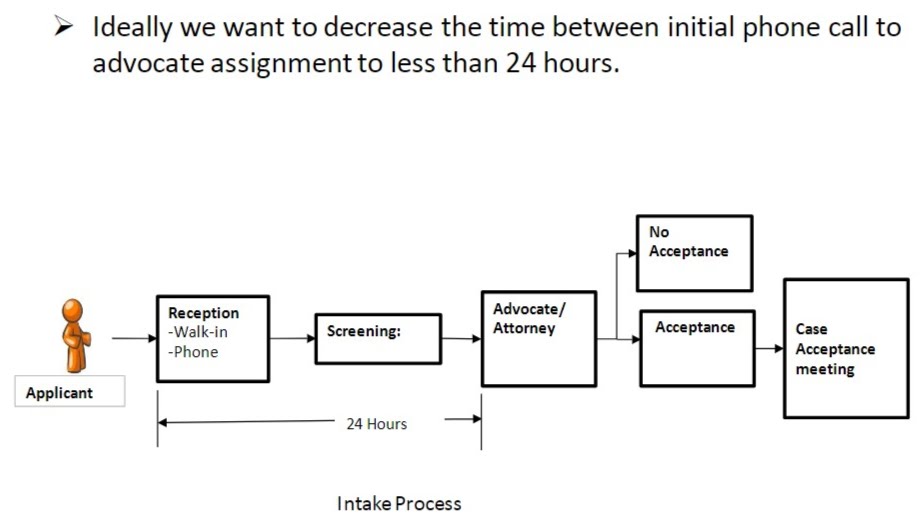 After this initial analysis, FRLS then broke down the problem and set targets.

One of the general problems the program had been having, it realized, was a lack of standardization across its offices in the number of available appointments, the criteria being used, methods of screening, and the assignment of cases. Not only that, but they were being wasteful: FRLS had too many stops along the way, preventing its processes from adding value.

The program’s targets then became:

And, to go along with the targets, several countermeasures were taken and seen through:

With a plan for corrective action in place, FRLS began monitoring the results and measuring improvement. They looked at whether the target was achieved and documented the successful processes—a practice that helps sustain improvements. 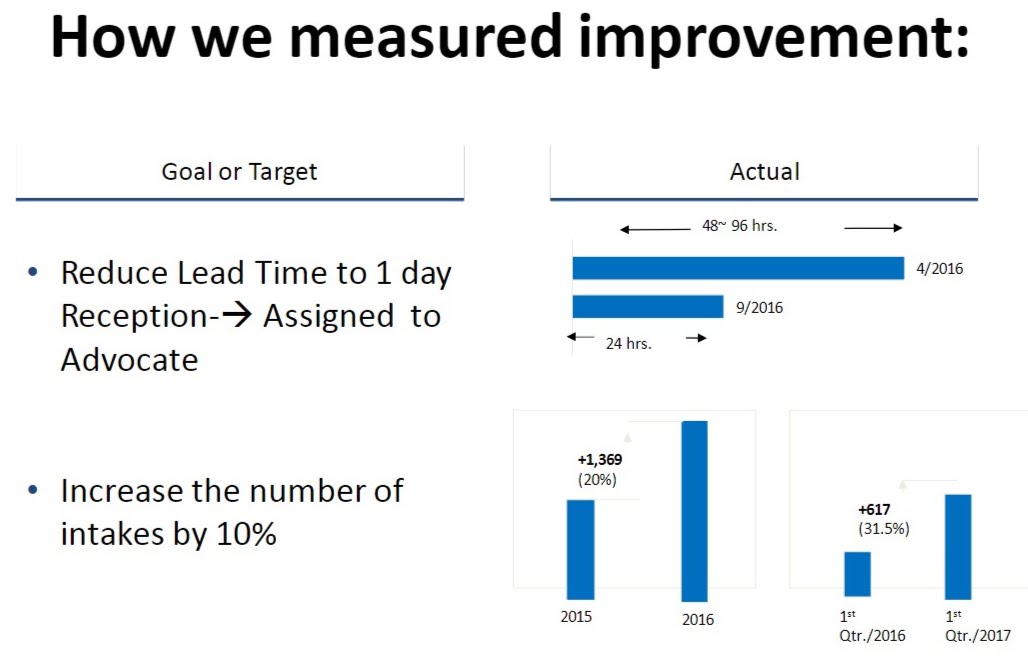 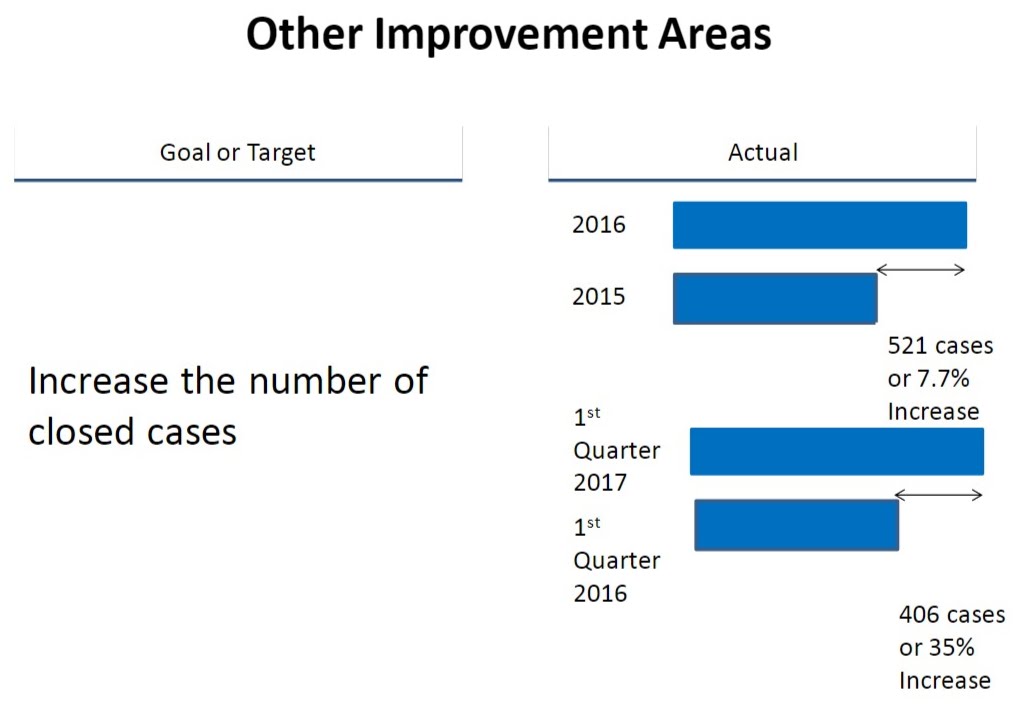 As can be seen in the images above, following Toyota’s model led to some positive changes in a short amount of time.

For example, the lead time, which was once multiple days on average, was now reduced to a day. Also, the number of intakes and closed cases both increased.

Before Florida Rural Legal Services got paired up with Toyota, it lacked the process uniformity that successful organizations such as Toyota covet—and practice—so much. Its offices were working in silos, with different intake being done in each one. Gaps and inefficiencies in the program’s workflow—which were invisible to the staff member or left unaddressed—were affecting the quality and quantity of services delivered to FRLS’ clients.

After implementing TPS, many things changed. The lead time has decreased, and the number of intakes and closed cases have increased. But the organization’s philosophy and culture have changed, too.

FRLS is now using business process analysis tools in intake, finance, and fundraising. They also talk about BPA in management meetings. And FRLS is changing the culture of its offices by adopting a client-first mindset, examining its process and workflows more closely, not jumping to solutions, tackling tough problems, and always asking “why.”

Thanks to Amy Burns from Florida Rural Legal Services for her help with the article. Also, there were two attorneys—Ilenia Sanchez Bryson from Legal Services of Greater Miami and Kristen Lentz from Disability Rights Florida—who worked on the project with FRLS and helped make it possible. FRLS would like to thank Lance Lewis from TSSC for all his help and patience.