Successful resource development begins with the leadership of the organization's board, along with sufficient, capable, and trained staff—or consultants—dedicated to the development of new resources and maintenance of existing ones.

In order to achieve successful resource development, an organization:

To help meet the growing need for private funding in legal aid, our Board of Directors Committee on the Promotion and Provision for the Delivery of Legal Services hosted a panel presentation in October 2012.

A number of legal aid organizations have endowment funds. However, at LSC grantees, they are less common. One of the few LSC-funded organizations that has one is Pine Tree Legal Assistance in Maine.

The idea of Pine Tree’s endowment fund, dubbed “The Pine Tree Fund,” was first conceived in 2011. It took a few years, though, for it to get off the ground. 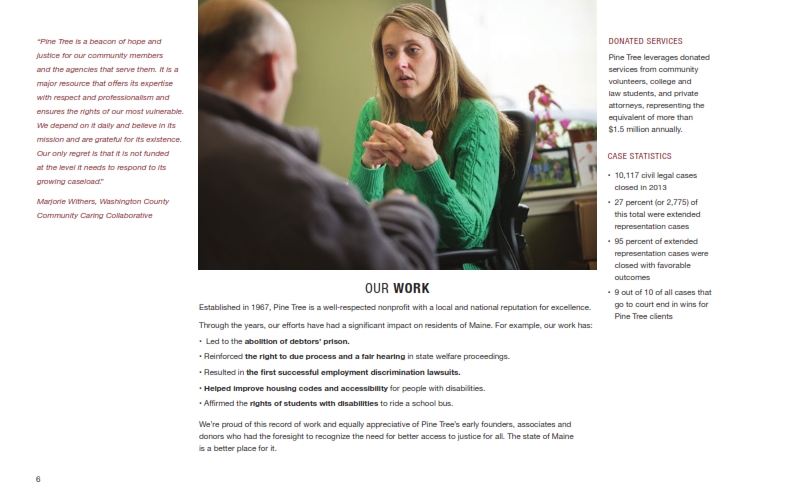 Early on, the organization’s board of directors signed off on the fund. Then a feasibility study was conducted in the fall of 2013, which found that the fund’s monetary goals could be successfully met. So Pine Tree launched its endowment effort in the summer of 2014, wrapping up in 2016 after surpassing its goal of $1.5 million.

As of December 2016, on the heels of its 50th anniversary in 2017—an event that it has been marketing as a fundraising opportunity—Pine Tree doesn’t have all of the $1.5 million in the bank. This shouldn’t give anyone pause; the endowment just needs time to grow.

According to the organization:

"The funds generated by a successful $1.5 million campaign will generate annual returns that will help 150 Mainers per year, providing help at a critical moment in their lives and making a difference in their ability to succeed in the future. … The endowment will provide much needed support where Pine Tree needs it the most. The flexibility and adaptability of the endowment fund will allow us to develop our expertise in emerging areas of need or use it to support critical infrastructure in years of financial uncertainty."

In Pine Tree’s 12-page brochure for its endowment fund, four words adorn the front page: “Celebrating Achievement, Creating Legacy.” (The brochure is a well-put-together and comprehensive tool that goes into detail about the organization’s mission and legacy, effective strategies, clients, work, importance for people who need help, facts and figures, and more.) Indeed, contributing to the fund recognizes 50 years of achievements in fighting for equal justice; creating a legacy requires, at the very least, a sustained period of hard work, dedication, and a goal-driven focus.

From 2014 to 2016, Pine Tree worked to recruit a special cabinet for the fundraising effort—many of whom were neither on its board of directors nor lawyers; was confident in negotiating with colleagues about their fundraising commitments; and raised one-third of the $1.5 million from attorneys and law firms. And the program did all of this in spite of the fact that its program management and fundraising expenses were less than 15 percent of its total operating budget. 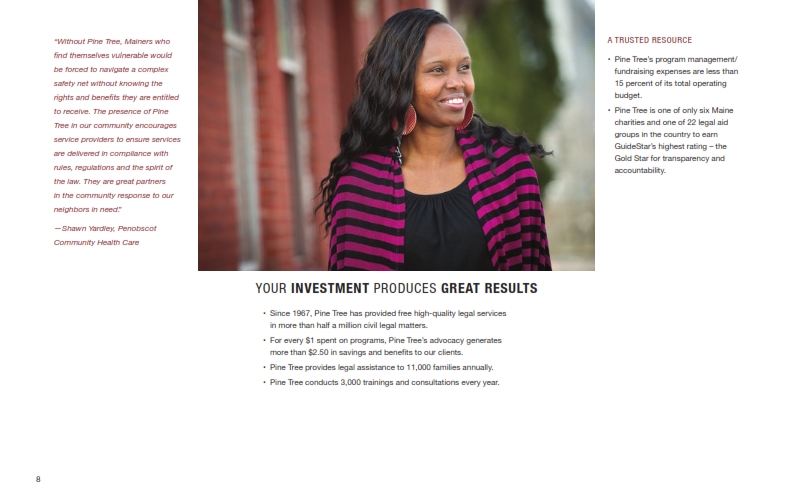 “I believe access to justice is more than an aspirational concept,” said Pine Tree’s campaign co-chair in the brochure. “As long as people can rely on getting high-quality legal representation at critical moments in their lives, our judicial system succeeds. Absent that access, people feel helpless and our system fails. By supporting this important endowment initiative and celebrating Pine Tree’s 50 years of service, we help ensure Pine Tree’s continuing legacy of providing a level playing field for the most vulnerable among us.”

The documentary, "The Atlanta Legal Aid Society—In Its Own Words," describes the organization's early history and then shifts to three of Atlanta Legal Aid's most significant advocacy efforts:

It concludes with a depiction of Atlanta Legal Aid Society's ongoing work, including a collaboration with Children's Health Care and Georgia State School of Law. The live premiere of the documentary served as a fundraising opportunity, and attendees contributed by making donations and purchasing ads and sponsorships. The documentary aired the day after the live premiere on Public Broadcasting Atlanta.

The D.C. Access to Justice Commission launched Raising the Bar in D.C. to encourage large firms to donate to local legal aid organizations.

The campaign had two goals:

The campaign urged all law firms, regardless of their size, to give to local legal aid providers at one of three levels:

By creating benchmarks that were set as a percentage of revenue, the tiers were equally accessible to firms of all sizes. Cash donations, donated attorney's fees, and payments for fellowships sponsored by the firm were all included.

Since its launch in 2010, the campaign grew by $830,000 and had received support from high-profile figures such as former Attorney General Eric Holder and former Washington, D.C. Major Vincent Gray.