LSC’s Leaders Council continued to grow in 2018 and pursued its mission to advance the work of LSC and its grantees. The Council—which expanded to 102 members by year’s end—worked for bipartisan support for LSC in Congress following the Administration budget proposal to eliminate funding for LSC for the second year in a row. In March, 11 current and former deans who serve on LSC’s leaders council joined more than 150 law school deans to write a letter to congressional leaders urging support for LSC. The signatories represented a diverse array of law schools, including private and public institutions of all sizes. The law deans explained the reason for penning the letter: “What brings us together today is a shared conviction that the loss of LSC funds would devastate efforts to provide access to essential legal services in our communities.” Members of the Leaders Council were also among the signatories of two other letters to Congress. More than 180 law firm leaders and 251 corporate general counsel signed onto letters urging continued funding for LSC. Leaders Council members also helped launch two new national task forces in 2018 to address the role of legal aid in supporting victims of the opioid epidemic and natural disasters. Members participated in organizing sessions and field hearings on these important topics. Leaders Council members helped shine a spotlight on legal aid at LSC events. At the Forum on Increasing Access to Justice at Georgetown University Law Center, bestselling author John Grisham spoke compellingly about the difference a lawyer makes to individuals and communities. Leaders Council Co-Chair and Merck & Co. CEO.

Continued progress in expanding meaningful access to our justice system for low-income individuals and families is essential to fulfilling America's promise of 'justice for all'. 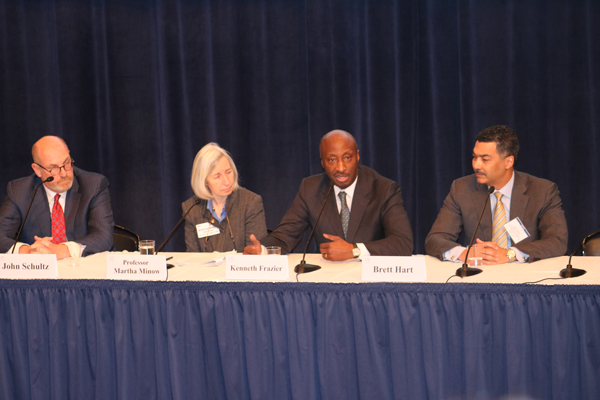 Members’ outreach efforts went beyond LSC-sponsored events. Leaders Council Co-Chairs Ken Frazier and Harriet Miers, a partner at Locke Lord LLP and a former White House Counsel, joined LSC Board Chair John G. Levi to write an op-ed that appeared in the National Law Journal on the challenges the opioid crisis and natural disasters present for already overburdened civil legal aid providers. In August, Leaders Council member and University of Michigan football coach Jim Harbaugh invited Representative Joseph Kennedy (MA-4) and LSC Board Chair Levi to discuss civil legal aid on his podcast, “Attack Every Day.” In May, Harbaugh traveled to Toledo, Ohio where he served as the keynote speaker for Advocates for Basic Equality and Legal Aid of Western Ohio’s Access to Justice Awards Dinner. He was presented with a key to the city by Mayor Wade Kapszukiewicz in recognition of his efforts to expand access to justice. “The legal system is one of the pillars of freedom we have in our country,” Harbaugh told The Blade. “It should be like the postal system. Everyone should have access. There’s a post office in every town, no matter where it is, how big or how small. There should be a way for people to understand how to fill out paperwork, have their case heard, and be represented through our legal system. That’s really all anyone has to turn to during a dispute to get a fair resolution.”