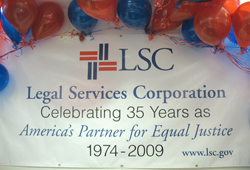 Thirty-five years ago on July 25, 1974, President Richard M. Nixon signed the Legal Services Corporation Act, a law that solidified the nation's commitment to ensuring equal access to justice, regardless of income. This year, President Barack Obama and members of Congress joined LSC and its grantees in celebrating three-and-a-half decades of work to fulfill that commitment. Keep reading to learn more about the history of the Legal Services Corporation and the importance of civil legal aid to keeping America's promise of
"justice for all."

On July 23, President Obama issued a proclamation recognizing LSC's 35th anniversary and calling upon legal professionals and all citizens "to honor the contributions of this vital organization." See below or click here for the full text. 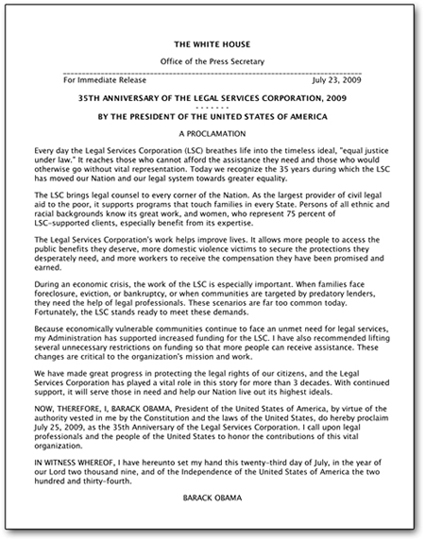 Nearly 40 years ago, President Nixon urged Congress to create LSC as an independent, nonprofit, federally-funded organization responsible for providing and overseeing grants to legal aid organizations around the country. At the time, this function was the purview of the now-defunct Office of Economic Opportunity (OEO).

"In the long uphill struggle to secure equal rights in America, the Federal program of legal services for the poor is a relative newcomer to the cause," Nixon's May 5, 1971, message to Congress proposing the establishment of LSC notes. "Yet it has already become a workhorse in this effort, pulling briskly and tirelessly at the task as the Nation moves ahead."

"For many of our citizens," it continues, "legal services has reaffirmed faith in our government of laws. However, if we are to preserve the strength of the program, we must make it immune to political pressures and make it a permanent part of our system of justice."

Two years later, Nixon again urged Congress to act, in a May 11, 1973, message arguing that the OEO legal services program had shown that "legal assistance for the poor, when properly provided, is one of the most constructive ways to help them to help themselves....[W]e have also learned that justice is served far better and differences settled more rationally within the system than on the streets."

A year later, in San Clemente, Calif., President Nixon signed the LSC Act into law as one of his last official acts before resigning the presidency on August 8.

Sen. Harkin's July 23 statement for the Congressional Record concluded by saying, "On this anniversary, I salute the Legal Services Corporation and LSC-funded attorneys for the vital work they do every day on behalf of Americans who need qualified counsel. Every day that a legal aid attorney protects the safety, security and health of our most vulnerable citizens, they bring this nation closer to living up to its commitment to equal justice for all."

Rep. Cohen's July 24 statement noted that "LSC's work is more important than ever before, partly because of the impact of the current recession." He added, "I welcome my fellow Members of Congress to join me in recognizing the critical role that the Legal Services Corporation plays in helping America live up to its commitment to ensure equal access to justice for all." 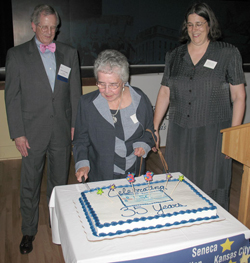 LSC's Board of Directors celebrated the anniversary with a reception at the Brown v. Board of Education National Historic Site on July 24, during its meeting in Topeka, Kansas. The celebration included readings of excerpts from the presidential proclamation and Congressional Record statements, remarks from Kansas Supreme Court Chief Justice Robert E. Davis and LSC President Helaine M. Barnett, and a pro bono awards ceremony. Ramona Shump, who served on one of LSC's first Board of Directors, was on hand to cut a special cake provided for the celebration.

LSC staff marked the occasion with a remembrance at the Corporation's Washington offices on July 28. The event included a video presentation featuring a slide show and remarks by some of LSC's long-serving staff members.

In a message to all LSC-funded programs, LSC President Helaine M. Barnett said, "The work of our programs is more critical than ever before to their clients' economic and personal survival and that of their families. Your commitment to help clients meet their challenges is impressive, as is your determination to deliver high-quality legal services ever more effectively and efficiently."

"Going forward, we must strive for a robust federally-funded legal services program and champion public and private efforts to help meet the civil legal needs of low-income families in order to make justice available not just to those who can afford to pay for it."

To date, twelve legal aid organizations in nine states, one access to justice commission and one state bar association issued statements recognizing LSC's milestone and drawing attention to the importance of the vital services provided by legal aid programs.

"As the Legal Services Corporation marks its 35th anniversary, we need to take stock of the importance of civil legal aid for the well-being of our neighbors, our communities, and the administration of justice in our society," said Csar Torres, executive director of Washington's Northwest Justice Project, in a July 31 op-ed published in the Seattle Times.

Commenting on the greater need for legal aid during the current economic recession, Montana Legal Services Executive Director Klaus Sitte said, in an August 1 op-ed in the Billings Gazette, "So, as we celebrate LSC's work and efforts for the past 35 years, we need to recognize that the promise of equal justice remains elusive for many. Times like these require all citizens to keep working to make the promise of equal justice a reality for all."

Georgia's Fulton County Daily Report published a letter to the editor from Bryan M. Cavan, president of the State Bar of Georgia, congratulating LSC Chairman Frank B. Strickland on the anniversary and praising him for his leadership.

"As a major source of funding for both the Georgia Legal Services Program and the Atlanta Legal Aid Society," said Cavan, "LSC serves a valuable public interest in our state by providing civil legal services to the poor."

Here is a list of programs who issued statements as of August 5: