The Hurricane Sandy Disaster Relief Act, passed by Congress and signed by President Obama in January, includes $1 million for the Legal Services Corporation (LSC) to provide assistance to low-income people in areas significantly affected by the hurricane. The funding will be distributed via grants to LSC-funded programs.

“Legal issues caused by natural disasters often disproportionately affect low-income families, seniors, veterans, and others who are least able to deal with them,” said LSC President James J. Sandman. “We are grateful for this supplemental appropriation, which will fund legal services for Sandy’s most vulnerable survivors.” 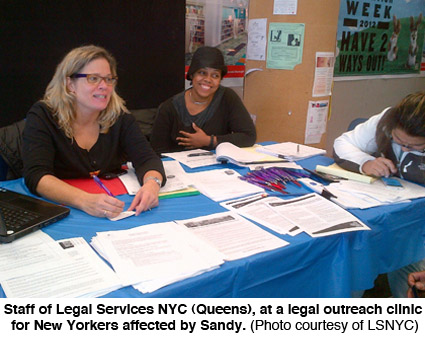 With tens of thousands of homes destroyed by the superstorm, housing issues are particularly pressing.  LSC grantees report that clients need legal help with a wide range of storm-related housing issues, including improper evictions, denial of insurance claims or inadequate reimbursement by insurance companies, delays in critical repairs, and home repair scams.

More than 170 “techies” and others interested in the intersection of technology and legal aid gathered in Jacksonville, Fla., in January for the 2013 Technology Initiative Grants (TIG) Conference.

“Measuring the Networked Nonprofit” author Beth Kanter challenged participants at the opening plenary to embrace the work of collecting, making sense of, and – “where the real magic happens” – applying data to improve programs and get results. That theme was echoed at a later session on Using Data to Improve Program Performance.

In a luncheon speech, LSC President Jim Sandman told the participants that they are key to the future of legal services.

“Technology is at the epicenter of innovation in legal services today,” he said. "I think you are the people who can help us demonstrate that this is an area where legal services can lead. My goal is to have the rest of the legal profession asking the question, ‘How are they doing it in legal services?’ and looking to us for the example we set and the leadership we show.”

LSC's Technology Initiative Grants (TIG) program will soon begin accepting letters of intent for the 2013 funding cycle.  A webinar for potential applicants will be held on Thursday, February 21, 2013 at 1 p.m. Eastern time.

Get more information about the TIG application process and register for the webinar.

Harvard Journal of Law and Technology Spotlights Access to Justice

The current issue of The Harvard Journal of Law and Technology features six papers on the topic of “Using Technology to Enhance Access to Justice.”   The papers were written for the recent LSC Technology Summit, which was a two-part gathering of thought leaders in legal services technology. LSC plans to issue a report from the summit later this year.

Justices, judges and a panel of disaster experts addressed the LSC Board of Directors on January 25 at the fourth LSC Board-sponsored forum on The State of Civil Legal Assistance. The forum, held at the Louisiana Supreme Court building, was convened in conjunction with the board’s quarterly meeting.

Watch a video of the opening remarks, and the panel of justices and judges.

Watch a video of the disaster preparedness and relief panel.

At a luncheon during the forum, Mississippi Supreme Court Justice Jess H. Dickinson spoke on Access to Justice: Past, Present and Future.

Read more about the award winners.

Find out more about LSC’s LRAP and how to apply.

Each year, LSC publishes Appendix A to 45 CFR Part 1611, which provides client income-eligibility standards based on the Department of Health and Human Services’ (DHHS) most recent federal poverty guidelines. On January 24, 2013, DHHS released the 2013 federal poverty data, and LSC has revised its regulations to reflect the new information.

The guidelines are published in the Federal Register and are also available on the LSC website.

News from the Field

Legal Aid Society of Cleveland Presses on Despite Budget Cuts