"Our veterans have defended and protected our most basic freedoms and now it is imperative that we stand up for them. That is why this special effort is so important," said Levi. "We are delighted to be working with the Department of Veterans Affairs to help make local Vet Centers aware of our services and to train those centers about the legal services that are available through our programs."

LSC Board Members Sworn in by Chief Justice Roberts

Chief Justice John G. Roberts Jr. officiated at a ceremonial swearing-in ceremony for the LSC Board of Directors on Nov. 19 in the East Conference Room of the U.S. Supreme Court. LSC Vice Chair Martha Minow gave welcoming remarks, and Chairman Levi introduced the most recent Board appointees-Father Pius Pietrzyk, Julie A. Reiskin and Gloria Valencia-Weber-to the Chief Justice.

Chairman Levi requested that other Board members join the new appointees for the oath of office "in the spirit of unity." Robert J. Grey Jr., Charles N.W. Keckler, Victor B. Maddox and Laurie Mikva participated in the swearing-in. Board members Sharon L. Browne and Harry J.F. Korrell III were unable to attend the ceremony.

Justice Elena Kagan, the newest member of the Supreme Court, attended the ceremony and was introduced to LSC Board members.

Learn more about LSC's Board of Directors at www.lsc.gov/about/board.php.

LSC dedicated the conference center in its Washington office to F. William "Bill" McCalpin on Nov. 19. McCalpin, who passed away last year at the age of 88, was a former chairman and two-time member of the LSC Board of Directors and a steadfast supporter of equal access to justice for the poor throughout his illustrious legal career.

LSC President Victor M. Fortuno opened the ceremony with a remembrance of Bill McCalpin. LSC Board Chairman John G. Levi read a letter written for the occasion by Secretary of State Hillary Rodham Clinton, who served with McCalpin during his first term on the LSC Board. 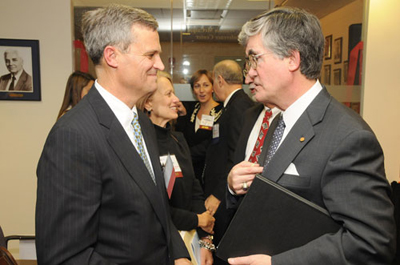 "I consider myself fortunate to have served with Bill on the Board of the LSC," wrote Secretary Clinton. "He was an extraordinary man, a valued mentor, and a true champion for equal justice and access to legal services for the poor."

John T. Broderick Jr., Chief Justice of the New Hampshire Supreme Court, who served with McCalpin during his second term on the LSC Board, delivered the keynote address.

David C. McCalpin, Bill's youngest son, also spoke at the event. McCalpin's widow, Margaret, was in attendance along with other family members.

To learn more about F. William McCalpin, download the program for the event (

1mb), which includes a biography, a timeline of his life of service and remembrances from his friends and colleagues.

Laurence Tribe, a Harvard Law professor who has served as the Justice Department's senior counselor for access to justice since early this year, will soon leave his position.

Vice President Biden, at the White House access to legal services event on November 19, said Prof. Tribe was returning to Harvard. "Larry Tribe will go down in history as one of the two or three most profound and thoughtful commentators on American constitutional law in the entire 20th century," the Vice President said.

Tribe, in a recent New York Times article, said his time with the Justice Department has been "extremely productive" and feels good about what has been accomplished.

The Walmart legal department announced plans to undertake an in-house pro bono program in which its attorneys, paralegals, and support staff will participate in legal aid projects in the Arkansas community. In doing so, Walmart has become the 100th signatory to the national Corporate Pro Bono Challenge(SM), a voluntary benchmark developed and administered by Corporate Pro Bono (CPBO), a partnership project of the Pro Bono Institute (PBI) and the Association of Corporate Counsel (ACC), designed to encourage and promote pro bono service with in-house lawyers and legal departments.

In addition, the Walmart legal department and the Walmart Foundation [has] announced a $115,000 donation to Legal Aid of Arkansas and the Arkansas Access to Justice Commission. The grant will help the Commission continue its efforts to address key issues raised by low-income clients, including family law, consumer practice, financial, housing, and employment matters.

Legal Aid of West Virginia is launching a legal [project] for veterans and military families.

Thanks to a major fundraising push, the Veterans' Legal Project [debuted on Veterans Day], with two attorneys dedicated specifically to help low-income veterans with issues such as disability benefits, housing, child support and problems with consumer and medical debt, according to a news release.

Equal Justice Works/AmeriCorps awarded West Virginia Legal Aid funding for the project in June, but with a catch: Legal Aid would have to raise $70,000 in matching funds for two attorney fellowships to qualify.

Bill Brennan spent half of his 42 years as an attorney at Atlanta Legal Aid trying to save the houses of poor homeowners, many of them elderly minority women, threatened with foreclosure.

As director of Legal Aid's Home Defense Program, Brennan's expertise on the seamier side of the mortgage industry, often described as "predatory lending," has resulted over the years in repeated appearances before Congress.

In the years leading up to the financial collapse, Brennan was howling in the wind about how practices in the mortgage industry, from subprime loans to punishing adjustable rates, were going to hurt not only homeowners but also lenders and Wall Street investors.

Now foreclosures on homes are at historic levels, with predictions of a million for this year nationwide. Home foreclosure legal advertisements for the five-county metro Atlanta area are currently running at about 7,000 to 9,000 a month.

Known by his colleagues as the heart of [Atlanta Legal Aid], Brennan, 67, retired this past week because of heart problems. We caught up with him at an Atlanta Starbucks. True to form, he came armed with charts and documents ready to talk about how things in the industry he watchdogged went so terribly wrong.

Monica Torres-Linares, a staff attorney at the Legal Aid Foundation of Metropolitan Chicago, was one of five legal aid lawyers to receive a $50,000 fellowship from the Chicago Bar Foundation and the Chicago Sun-Times on Oct. 25.

The fellowships are awarded to individual legal aid or public interest law attorneys who demonstrate a commitment to public interest work, academic achievement in law school, and outstanding character and integrity. The $50,000 award will provide loan repayment assistance to the lawyers so they can afford to continue working at their public interest organizations.

Before joining the Legal Assistance Foundation in 2008, Torres-Linares worked in the Child Protection Division of the Circuit Court of Cook County, the Cook County Public Defender's office, and the Mexican-American Legal Defense Fund. She has served as president of the Hispanic Lawyers Association of Illinois and has received the Latino Law Student Association Alumni Award from The John Marshall Law School, from which she graduated in 2002.

"I also want to work for legal aid," says the idealistic young woman, envisioning her future career in the law. "It must be so fascinating to help poor people with their legal problems."

"What's fascinating," quips the jaded lawyer, "is that you will be one of these poor people, except you will have $100,000 in law school debt."

The above exchange is from an animated video clip that lampoons the perhaps-nave dreams of those contemplating a legal career. The video, "So You Wanna Go to Law School," is the creation of a Virginia lawyer and has been viewed on YouTube nearly one million times.

The sad truth spotlighted by the video is that for many, legal aid work is simply unaffordable: the small salaries cannot match the crushing debt loads carried by most lawyers.

National groups like the American Bar Association and the National Legal Aid and Defender Association have found that law school graduates often enter the work world with tens of thousands of dollars in debt. Meanwhile, the National Association of Law Placement has shown time and again that civil legal aid lawyers are among the lowest-paid in the legal profession, earning less than public defenders and other public interest lawyers and far less than their counterparts in the private sector.

Ultimately, this debt-to-salary chasm swallows up potential legal aid clients, who are turned away from programs that lack the funds to recruit and retain the staff necessary to meet the need for their services. That is why Congress, the Legal Services Corporation, state bar associations and law schools have responded by establishing loan repayment assistance programs to make a legal aid career more affordable.

Watch "So You Wanna Go to Law School" on YouTube.

Success Story from the Legal Aid Society of Cleveland

A disabled 58 year-old Air Force and Vietnam veteran contacted Cleveland Legal Aid because his VA benefits had been terminated under the VA's "fugitive felon" program. After his discharge from the service, the veteran got into trouble with the law as a result of undiagnosed mental health problems. In 2003, his mental health problems were finally diagnosed and he began receiving mental health services. The VA found him to be "permanently and totally disabled" and granted VA pension benefits retroactive to 2006.

However, in 2009 VA terminated his benefits because of an outstanding Florida probation warrant from 1986. The warrant was issued when he became homeless upon release from prison. The veteran had returned to his family in Ohio, thus causing him to violate the terms of his probation.

With the help of a public defender in Florida, his warrant was cleared, but not before his benefits were terminated and he was charged with a $39,000 overpayment as a "fugitive felon." Cleveland Legal Aid attorney Jennifer Becker requested a hearing with the VA Committee on Waivers and Compromise and represented him at the hearing. As a result, the Committee waived the overpayment in October 2010.

Learn more about the Legal Aid Society of Cleveland at www.lasclev.org.

Created by Congress in 1974, LSC’s mission is to promote equal access to justice in our Nation and to provide high quality civil legal assistance to low-income persons. LSC Updates is produced by LSC’s Office of Government Relations & Public Affairs. Questions, comments, or articles can be submitted to Sean Driscoll, Special Assistant, at driscolls@lsc.gov.