LSC Releases Updated Report on the Justice Gap in America 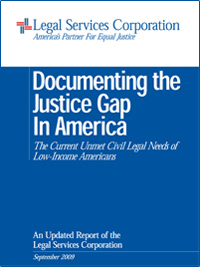 Washington, DC -- Nearly a million poor people who seek help for civil legal problems, such as foreclosures and domestic violence, will be turned away this year by the nation's largest nonprofit legal aid network because of insufficient resources, the Legal Services Corporation (LSC) projects in a report released today.

The report is the Corporation's second analysis of the "justice gap" in America -- the difference between the level of civil legal assistance available and the level that is necessary to meet the legal needs of low-income individuals and families.

For every client served by LSC programs, another person who seeks help is turned away, the report concludes. The conclusion reaffirms a 2005 report by LSC that also found 50 percent of potential clients seeking help from LSC-funded programs were not served because of a lack of resources.

"This nation is built on the promise of equal justice under law, but there is a justice gap in America. We must do more to close the justice gap and provide equal access to justice for all Americans, regardless of their economic status," LSC President Helaine M. Barnett said.

"Many of these Americans in need of legal assistance are the most vulnerable among us-they are trying to escape from domestic violence, trying to avert foreclosure and homelessness, trying to qualify for disability benefits, trying to recover from natural disasters. Legal aid saves lives and makes communities stronger," LSC President Barnett said.

The report projects that LSC programs will not be able to meet the legal needs of about 944,000 poor people seeking assistance in 2009, slightly more than the programs served in 2008. In one category -- foreclosures -- LSC-funded programs are projected to turn away two for every person served. Programs also will take up fewer than half of the requests for help with employment and family law matters, the report shows.

Despite increased appropriations from the Congress in recent years, state and local government funding and contributions from charitable donors and foundations declined during the recession. Funding from Interest on Lawyers' Trust Accounts (IOLTA), in particular, has dropped significantly in many states.