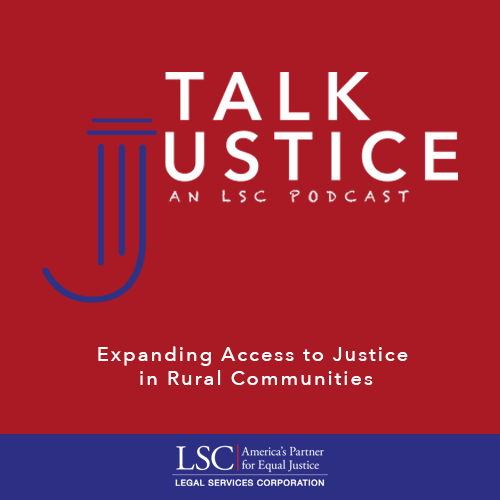 Experts discuss how the legal system operates in rural communities and how to expand access to justice in these regions on the latest episode of Talk Justice.

Whitney Kimball Coe is the director of National Programs at the Center for Rural Strategies. In that role, she leads the Rural Assembly, a nationwide movement striving to build better policy and more opportunity for rural communities across the country. As an organizer, speaker, moderator, and writer, Whitney has shared her perspectives on community and civic courage with audiences around the world. She has been featured on stage at the Aspen Ideas Festival and the inaugural Obama Foundation Summit, and as a guest on the radio program On Being with Krista Tippett. She writes a regular column for her local newspaper, the Daily Post Athenian, and has participated in Citizen University’s Civic Saturday Fellowship program. She holds a M.A. in Appalachian studies from Appalachian State University and an undergraduate degree in religion and philosophy from Queens University. She lives in her hometown of Athens, Tennessee with her husband Matt, and daughters, Lucy and Susannah.

Rapp is the General Counsel and Chief Privacy Officer of Ascendium Education Group in Madison, Wisconsin.  She previously served as a Dane County Circuit Court Judge and Assistant Attorney General at the Wisconsin Department of Justice in Madison and at a law firm and nonprofit in Washington, D.C.  She volunteers with several local and national access to justice initiatives aimed at providing civil legal services to those who cannot afford them.  She received her bachelor’s and law degrees from The University of Chicago and a master’s degree from The University of Oxford.

Ronald S. Flagg was appointed President of Legal Services Corporation effective February 20, 2020, and previously served as Vice President for Legal Affairs and General Counsel since 2013. He previously practiced commercial and administrative litigation at Sidley Austin LLP for 31 years, 27 years as a partner. He chaired the firm's Committee on Pro Bono and Public Interest Law for more than a decade.