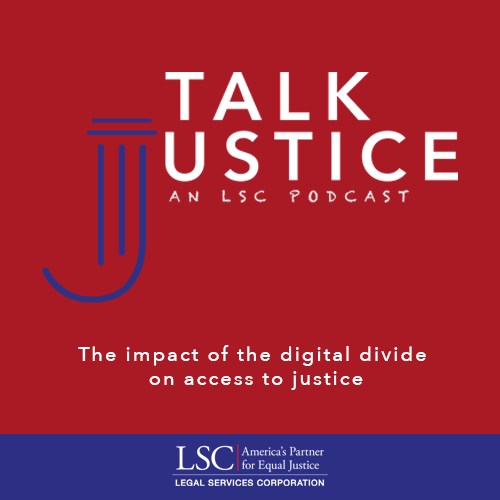 The impact of the digital divide on access to justice

The COVID-19 pandemic has caused courts—previously slow to adopt new technology—to leap into prioritizing digital services. As legal aid and court services increase the use of online tools, there is a concern that people without access to technology and high-speed internet will be left behind. This gap, referred to as the “digital divide,” is the topic of the latest Talk Justice episode.

Katherine Alteneder built SRLN into a broad international network of justice system and allied professionals who are creating innovative and evidence-based solutions so that self-represented litigants have meaningful access to the courts and get the legal help they need. She now serves as the Consulting Senior Strategic Advisor, and guides SRLN’s many activities designed to grow the justice ecosystem and strengthen each part of the legal help continuum.

Before joining SRLN in 2013, Katherine spent her career in Alaska, initially as a trial court law clerk and then as a legal aid lawyer. In 2001, she joined the Alaska Court System as the Founding Director of the nation’s first comprehensive phone and internet based court self-help center. In 2008, Katherine established a successful unbundled practice and founded the first Unbundled Law Section of a state bar. Katherine is a frequent speaker and serves on numerous advisory bodies including the Advisory Committee for Voices for Civil Justice, Village Capital’s Justice Tech Advisory Board, and the National Center for State Courts Justice for All Project. She is also a Non-Resident Senior Fellow at the Georgetown Institute for Technology Law and Policy. Katherine received the National Center for State Courts Distinguished Service Award in 2019 for her work to improve access to justice. Katherine has a BA from Northwestern University, a JD from Seattle University School of Law, and resides in Virginia. Katherine especially enjoys opportunities to mentor those who seeking a career path in access to justice and public interest law.

Leslie Powell-Boudreaux is the Executive Director of Legal Services of North Florida (LSNF). Leslie has worked as Senior Attorney of LSNF’s Pensacola office, where her primary areas of practice were housing and consumer issues; and representation of victims, including children within the dependency system and victims of domestic and sexual violence. She was also a Senior Attorney with Legal Services of Greater Miami’s Employment and Economic Security unit. Under her leadership in Pensacola, the United Way of Escambia County recognized LSNF as its 2015 and 2017 Partner Agency of the Year. The Escambia Santa Rosa Bar Association awarded Leslie with its Community Service Award in 2015. Leslie received her undergraduate degree from North Carolina State University and her Juris Doctor from the University of North Carolina-Chapel Hill School of Law.

Sean McDonald builds governance for technology and technology for governance. Sean is the co-founder of Digital Public, where he focuses on data governance design. He is a lawyer and the CEO of FrontlineSMS, an award-winning public interest technology company. Sean is a Senior Fellow at the Center for International Governance Innovation and the organizer of the Data Governance Design Conference.

Sean is also a researcher and writer whose work has been published by the Review of the International Committee of the Red Cross, the Brookings Institution, Stanford Social Innovation Review, Foreign Policy, VoxPopLii, The New Humanitarian, the Center for Internet & Society, among others. Sean is an advisor to a number of civil society organizations, as well as data governance research projects at Tilburg University and the University of Oslo. Sean was formerly a Visiting Fellow at Stanford’s Digital Civil Society Lab, a Hivos Digital and Creative Futures Fellow, a Research Fellow at Duke’s Center for Law and Technology, an Affiliate at Harvard’s Berkman Klein Center. He holds a JD/MA from American University, with specializations in international law and alternative dispute resolution.